A Year in the Life: Ambient Math Wins the Race to the Top!
Day 199

The Crow and the Pitcher

A Crow perishing with thirst saw a pitcher, and hoping to find water, flew to it with delight. When he reached it, he discovered to his grief that it contained so little water that he could not possibly get at it. He tried everything he could think of to reach the water, but all his efforts were in vain. At last he collected as many stones as he could carry and dropped them one by one with his beak into the pitcher, until he brought the water within his reach and thus saved his life.
Necessity is the mother of invention.

The idea here is that the crow started with 12 stones and when he found they weren’t nearly enough to raise the water level to where he needed it to be, he collected many more stones until he had 120, and then was finally able to drink.  The activity, which teaches/reviews the 10 times table, goes like this:

Using large index cards, or 1/2 sheets of construction or computer paper and a crayon, write the numbers 1-12.  Place them in a column on the floor, and have the child(ren) place a stone next to each number, thus changing the 1’s to 10’s.  Mention that Crow started out with only 12 pebbles, but saw they weren’t nearly enough to bring the water level up.  Then, through diligence and hard work, he was able to collect 120 pebbles, which brought the water within reach!  Finish the lesson with a drawing, as always. 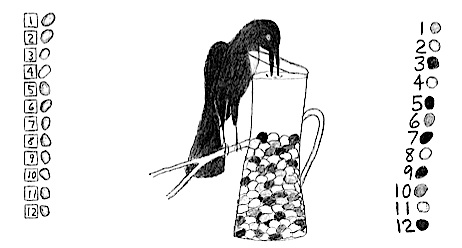 Use this idea for today’s standard by writing the examples listed in it vertically.  Multiply them, then place the stones to the right of the 8, 6, 72, and 30.  This will convey the place values by changing the 8 to 80, the 6 to 60, the 72 to 720, and the 30 to 300.  The stones, like many other props (preferably taken from nature), make it real and save the day: away from boring pencil and paper or computer screen drill.  Keep it real and interesting, always.