A Year in the Life: Ambient Math Wins the Race to the Top!
Day 217

Today’s post focuses on movement and exercise as perhaps the most vital element, not only for physical and mental health, but also for brain function and optimal learning ability.  Here’s an excerpt (read the full article here):

“This morning the medical journal Pediatrics published research that found kids who took part in a regular physical activity program showed important enhancement of cognitive performance and brain function. The findings, according to University of Illinois professor Charles Hillman and colleagues, “demonstrate a causal effect of a physical program on executive control, and provide support for physical activity for improving childhood cognition and brain health.” If it seems odd that this is something that still needs support, that’s because it is odd, yes. Physical activity is clearly a high, high-yield investment for all kids, but especially those attentive or hyperactive. This brand of research is still published and written about as though it were a novel finding, in part because exercise programs for kids remain underfunded and underprioritized in many school curricula, even though exercise is clearly integral to maximizing the utility of time spent in class.”

A picture’s worth a thousand words.  Here’s a picture of brain function with and without exercise.  “Electrophysiological plots representing brain processing capacity and mental workload (P3 amplitude) during cognitive tasks that require executive control in children in the experiment and control groups. Red represents the greatest amplitude, and blue the lowest.
(Hillman et al, Pediatrics/The Atlantic)” 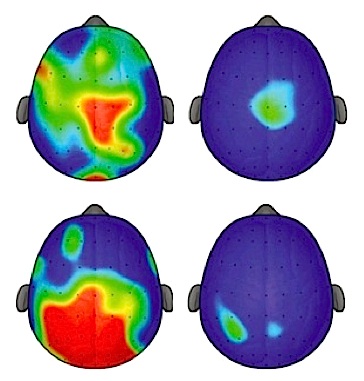 Movement and physical exercise wins the day!  And so much more so with math than other subjects.  It should be a no-brainer to include (or reinstate) p.e. classes, but beyond having p.e. tacked on as an extra subject, lies the very real truth that movement should be an integral part of all academics.

Knowledge ensues in an environment dedicated to imaginative, creative knowing, where student and teacher alike surrender to the ensuing of knowledge as a worthy goal. Tune in again tomorrow for more Grade 3 fun!