A Year in the Life: Ambient Math Wins the Race to the Top!
Day 184

Why ambient?  A math teaching style that’s whole and all encompassing, with themes that repeat many times through the years, is most likely to be effective and successful.  Today’s post takes a time out to ask the question, “Is the Common Core rigorous or silly?”  It’s a serious question.  Serious because some seemingly irrevocable steps have been taken at great expense and very likely in the wrong direction.

A Wall Street Journal article by Marina Ratner, professor emerita of mathematics at the University of California, Berkeley, asks why $15.8 billion was invested nationally in the Common Core (according to a 2012 estimate by the Pioneer Institute) to replace individual state standards that may very well have been far superior.  California’s state standards for example, were considered the top math standards in the nation.  The Math By Hand curriculum is aligned to both the old California State and the old National Math Standards for this reason.

Ms. Ratner says,
“It became clear to me that the Common Core’s “deeper” and “more rigorous” standards mean replacing math with some kind of illustrative counting saturated with pictures, diagrams and elaborate word problems. Simple concepts are made artificially intricate and complex with the pretense of being deeper—while the actual content taught was primitive.

Yet the most astounding statement I have read is the claim that Common Core standards are “internationally benchmarked.” They are not. The Common Core fails any comparison with the standards of high-achieving countries, just as they fail compared to the old California standards.”  Here is a pictorial example, taken from the article, an illustration by Martin Kozlowski. 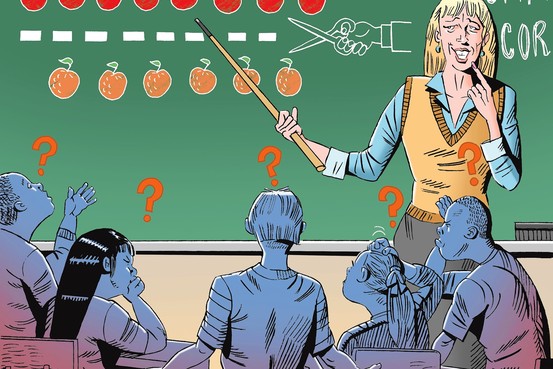 Read the entire article here, and see if you don’t agree that while the Common Core may be posing as “deeper and more rigorous,” in reality it may be merely repetitious, and downright irrelevant to the true nature, depth, and beauty of mathematics.

Knowledge ensues in an environment dedicated to imaginative, creative knowing, where student and teacher alike surrender to the ensuing of knowledge as a worthy goal.  Tune in tomorrow for more Grade 3 math CCSS and their ambient counterparts.