A Year in the Life: Ambient Math Wins the Race to the Top!
Day 47

Why ambient?  A math teaching style that’s whole and all encompassing, with themes that repeat many times through the years, is most likely to be effective and successful.  Today is the first day of Grade 1, which will be structured differently from the Kindergarten posts, following a block plan format.  The Common Core standards will again be addressed one by one.

The Waldorf Grade 1, 6-7 year old is ready for structured learning, eager to begin to take on the world and all there is to learn in it.  This transition is a momentous one, so it’s appropriate to begin with a 3-4 week block of form drawing.  Main lessons are 1 1/2 – 2 hours long, in the morning, after a brief circle time.

Form drawing will be the focus of this post.  Block plan scheduling and the main lesson format will be described in detail over the next few days.  The following is excerpted from the Grade 1 Form Drawing and Stories book.

Form drawing promotes an awareness of archetypal forms, enhancing eye-hand coordination and creativity.  Forms are introduced through images and stories, translated to movement, traced in the air, and finally drawn on paper.  The story or image provides a picture of the form, thereby making it more accessible.  Using large motor movements to introduce new concepts incorporates a spatial orientation that effectively transitions later on to working with fine motor skills.

Simpler forms can be run very large, on the floor or ground, indoors or out.  Many forms can be contained within a circle or other visual parameters, which can be drawn on the floor or the pavement with chalk.  Running the forms is an effective technique that is also helpful with letter and number formation.  For the mirrored/symmetrical forms, the teacher moves the form on one side while the student watches, mirroring the movement on the other side.

The beginning drawings in Grade 1 illustrate the idea that all things are made up of straight or curved lines or some combination of the two.  Vertical symmetrical or mirrored forms are drawn on one side and mirrored on the other.  They improve balance, spatial orientation, and eye-hand coordination, while forms with invisible lines help develop control and mastery, along with fluidity and flexibility.

See below for some examples of Grade 1 form drawing.  Each one can be introduced along with a story that expresses its uniqueness.  The top left form could be described as a “A Sunrise,” the straight, radiating lines form an invisible half circle.  The top right form, “A Butterfly,” a vertical mirror image.  The middle left, “Brother and Sister Pine Trees,” graduated vertical straight lines.  The middle right, “Ram’s Horns,” another mirror image.  And the bottom form, “A Falling Leaf” or a swing, vertical motion in curved lines.

Knowledge ensues in an environment dedicated to imaginative, creative knowing, where student and teacher alike surrender to the ensuing of that knowledge as a worthy goal.  More Grade 1 tomorrow! 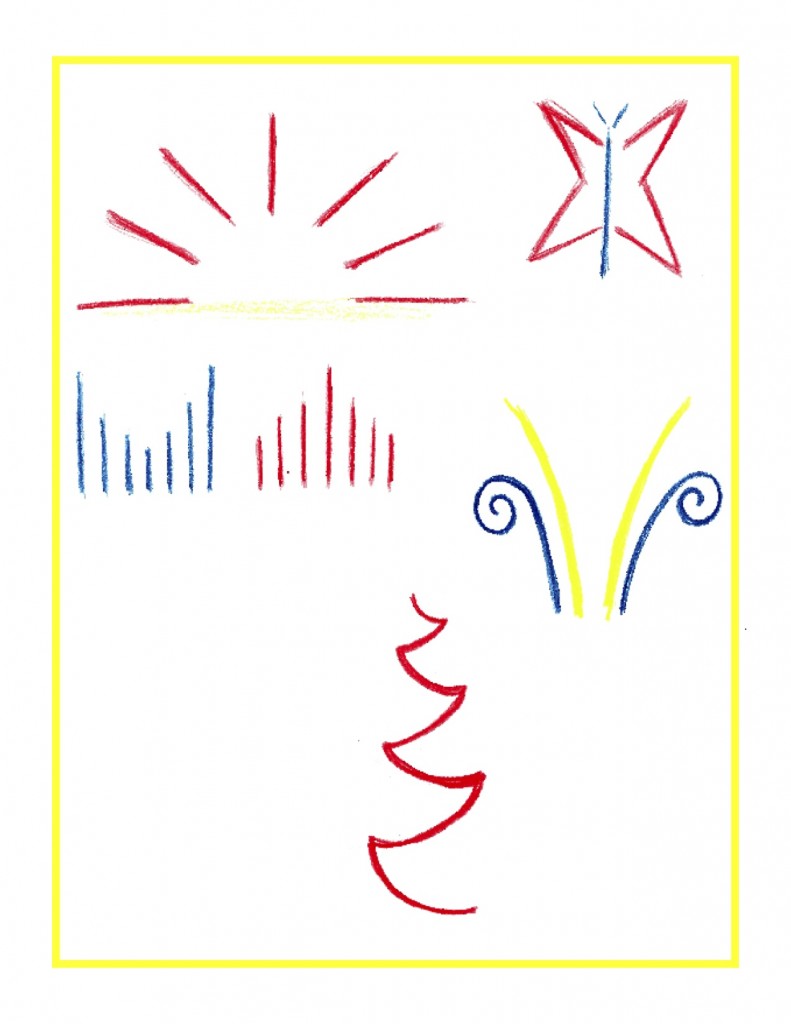