The Bremen Town Musicians: A Farewell to Kindergarten (#45)

A Year in the Life: Ambient Math Wins the Race to the Top!
Day 45

Why ambient?  A math teaching style that’s whole and all encompassing, with themes that repeat many times through the years, is most likely to be effective and successful. Today’s post, as a farewell to the Kindergarten, features Bruno Bettleheim’s thoughts on why fairy tales are the best fare for a young developing mind.  And to close, the wonderful Grimm’s tale, “The Bremen Town Musicians,” used as the Math By Hand / Grade 1 introduction to the number 4 (see the accompanying Grade 1 drawings at the bottom).  If this tale is told a number of times in the Kindergarten, it will be reassuringly familiar when it comes again the following year.

Taken from the Math By Hand / Grade 1 introduction to the fairy tales for the numbers 1-12,
“Bettelheim says that the child’s mind, rapidly expanding into new fields of knowledge and experience, fills the resultant huge gaps in understanding with fantasy.  This impulse finds a true friend in the fairy and folk tale.  Beginning with realistic scenarios, such as a mother sending her daughter off alone to Grandmother’s, or a father and stepmother worrying about not having enough food for themselves and their two children, (“Little Red Riding Hood” and Hansel and Gretel”) the story inevitably escalates into a fantastic world of animals who speak, evil witches in candy covered houses, frogs who are enchanted kings, and other wonderful flights into a world where disbelief is willingly suspended.  The hero of the story, (often a boy or girl, or a kind-hearted, simple soul) after facing many trials and tribulations, always wins in the end.  Thus, fantasy is given free reign, with events in the story that are far more challenging than any real life has to offer.  A child has difficulty absorbing abstract facts and reasoning, since the capacity to understand them is not yet sufficiently developed.  These stories, rich in symbolic pictures, carry comfort and conviction, whereas “facts” are usually confusing, thus causing greater uncertainty.  The story of Jack the Giant Killer is more reassuring to a fearful child than simply stating the fact that there are no giants.  Jack is a small boy pitted against a huge, fearful giant.  He wins his life (and riches as well) by cleverly using his wits.”

Though this may be off the math subject, I’d like to contrast the above sentiment to that of presenting a Kindergartner with a worksheet or an assessment test.  These mistaken interpretations of the Common Core are causing much heartache and pain, to children and parents alike.  It may be true that the Common Core Standards do not inherently demand that the concepts they offer be drilled and then tested, but unfortunately this is indeed how the Common Core is largely being interpreted.  Now let us escape to the wonderful world of “The Bremen Town Musicians” . . .

With this we say farewell to the Kindergarten, and begin looking at first grade tomorrow.  Knowledge ensues in an environment dedicated to imaginative, creative knowing, where student and teacher alike surrender to the ensuing of that knowledge as a worthy goal. 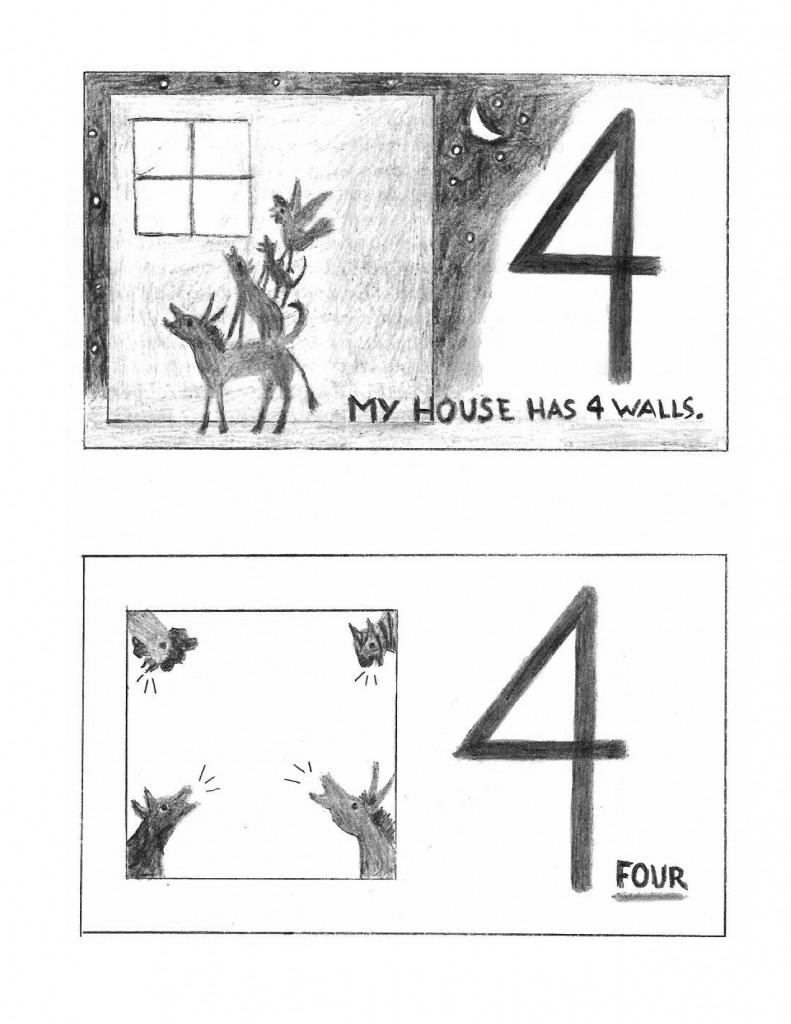 2 thoughts on “The Bremen Town Musicians: A Farewell to Kindergarten (#45)”