Fairy Tales: Why Are They Wonderful? Quotable Quotes (#44)

A Year in the Life: Ambient Math Wins the Race to the Top!
Day 44

Why ambient?  A math teaching style that’s whole and all encompassing, with themes that repeat many times through the years, is most likely to be effective and successful. Today’s post, a variety of voices proclaiming the wonder and value of fairy tales, will be a prelude to tomorrow’s story.

When i examine myself and my methods of thought, I come to the conclusion that the gift of fantasy has meant more to me than any talent for abstract thinking.

Marie Curie
I am among those who think that science has great beauty.  A scientist in his laboratory is not only a technician: he is also a child placed before natural phenomena which impress him like a fairy tale.

Hans Christian Andersen
Life itself is the most wonderful fairy tale of all.

CS Lewis
When I was ten, I read fairy tales in secret and would have been ashamed if I had been found doing so.  Now that I am fifty, I read them openly.

Charles Dickens
In a utilitarian age, of all other times, it is a matter of grave importance that fairy tales should be respected.

Bruno Bettelheim
To everybody who has heard fairy tales, the image and feeling of being lost in a deep, dark forest are unforgettable.

Once children become better acquainted with fairy tales, the fearsome aspects seem to disappear, while the reassuring features become ever more dominant.  The original displeasure of anxiety then turns into the great pleasure of anxiety successfully faced and mastered.

Rudolf Steiner
Just as the body needs to have nutritive substances circulating through the organism, the soul needs fairy tale substance flowing through its veins.

Because fairy tales belong to our innermost feeling and emotional life and to everything connected with it, they are of all forms of literature the most appropriate for children’s hearts and minds.  It is evident that they are able to combine the richest wisdom with the simplest manner of expression . . . there is no greater art than this one, which traces the path from the unknown, unknowable depths of the soul to the charming and often playful fairy tale pictures.

Knowledge ensues in an environment dedicated to imaginative, creative knowing, where student and teacher alike surrender to the ensuing of that knowledge as a worthy goal.  Tune in tomorrow for a wonderful Kindergarten fairy tale farewell . . . 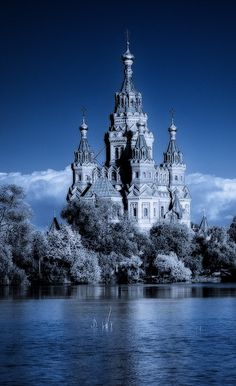