A Year in the Life: Ambient Math Wins the Race to the Top!
Day 135

Number and Operations in Base Ten   2.NBT
Understand place value.
4. Compare two three digit numbers, based on meanings of the hundreds, tens, and ones digits. using >, =, and < symbols to record the results of comparisons.

This concept is introduced in the Math By Hand / Grade 1 / Daily Lesson Plans book, with a story, and illustration, and lots of practice.  As always, the story and the picture carry the day, taking the edge off the abstract concept.  Having a picture in mind when attempting to recall and practice “greater-less than” is extremely helpful.  The story below is told on day 1, retold on day 2 by the child(ren), illustrated, and then practiced.  Here are the story, the instructions for teaching the concept, and the illustration, all from the MBH Grade 1 Daily Lesson Plans book.  This should be brought back in Grade 2, then expanded to include two- and three-digit numbers.

Knowledge ensues in an environment dedicated to imaginative, creative knowing, where student and teacher alike surrender to the ensuing of knowledge as a worthy goal.  Tune in tomorrow for more Common Core, and its ambient, Waldorf/Math By Hand counterpart.

Equations / Equivalency Story
The numbers love to play, alone and in teams.  Often their games are tied, with both sides scoring the same.  The equals sign is a good score keeper who sees both sides. (Hold your hands in front, palms down facing different directions, with index fingers slightly pointed.)   The numbers also like to compete one on one, to show whose value is greater or less. Then they use a special sign, one that cheers the greater number, turning away from the number that’s less.  (A “talking” gesture with your fingertips shows the “greater-less than” sign.)

Greater-Less Than Story / Retelling / Activity / Drawing
Have the child(ren) retell the story.  Compare the “talking fingers” gesture to the greater-less than sign, saying the open end cheers for the greater number and the closed end turns away from the smaller number.

Do a guided drawing page of several examples.  Write the equations and captions in green, surrounding GREATER and the greater number with a yellow background and rays, and LESS and the lesser number with blue. 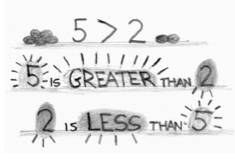