A Year in the Life: Ambient Math Wins the Race to the Top!
Day 134

Before beginning today’s post, just a thought.  With all the attention being given Common Core, and the very significant amount of parent and teacher objection to its developmental inappropriateness and challenging to downright ridiculous curriculum applications and testing, and the real, severe harm caused children by CCSS, why am I doing this?  Well, it is entirely possible that Common Core will be scrapped, or reformed, or sidestepped.

But then again, it could be here to stay, the way other senseless things seem to be.  (I started to list them, but it’s too depressing and the list is way too long.  You get the idea.)  Sooooo, if it’s here to stay and we have to somehow deal with it, then this blog is of interest and is a valuable resource.  On the other hand, it’s also an opportunity to expand/expound on the Waldorf-Math By Hand system in a specific, directed way.  I have, and will continue to, been/be vigilant and crystal clear about what and when CCSS is missing the mark.

Base-ten numerals up to 1,000 are liberally used throughout all calculations with the 4 processes.  Math By Hand strongly advises that answers should be written out in words as well as numbers.  This also allows a sense of their expanded form as the numbers are put into words, for example: 743 is written as seven hundred and forty three. Direct exercises with expanded form are also included such as: 7 hundreds, 4 tens, and 3 ones.  See below for a page from the Grade 2 Math By Hand binder.

Knowledge ensues in an environment dedicated to imaginative, creative knowing, where student and teacher alike surrender to the ensuing of knowledge as a worthy goal.  Tune in tomorrow for more Common Core, and its ambient, Waldorf/Math By Hand counterpart. 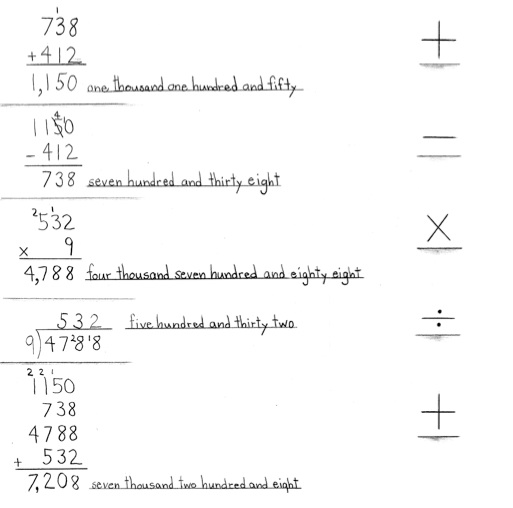