A Year in the Life: Ambient Math Wins the Race to the Top!
Day 268

The coin exercise from post #267 would fulfill this standard nicely since the circled coin amounts are labeled as both fractions and decimals, and are also expanded or reduced from or to tenths to hundredths and vice versa.  The Math By Hand / Grade 4 / Kit 3 / Decimals includes a reversible write-on/wipe-off conversion chart.  On side 1: fractions to decimals, and on side 2: decimals to fractions.

Oversized fraction lines and a division sign are featured on both work surfaces.  A wipe-off crayon and eraser is supplied with the laminated charts, with the conversions later copied into workbooks.  The decimal version in measurement could be integrated with a project (building or gardening, etc.) so it’s less abstract and more user-friendly.  Math By Hand covers the number line with an extensive introduction and tools for working with the 4 processes and positive/negative numbers.  After the CCSS 4.NF 7 post, several posts will be devoted to the Math By Hand number line materials.

On to the glorious Grade 4 trickster tales!  One of Math By Hand’s multi-cultural tales features Nasrudin, a Middle Eastern folklore figure whose humorous escapades often involve his hapless donkey.  These tales, both wry and wise, have earned Nasrudin a beloved place in many hearts, young and old.  And they most certainly quench the fourth grader’s thirst for rambunctious adventure! 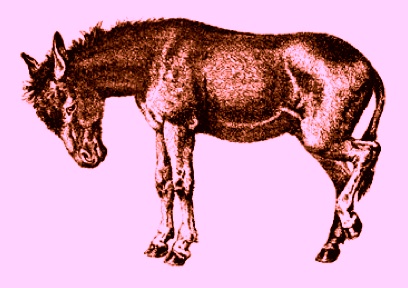