A Year in the Life: Ambient Math Wins the Race to the Top!
Day 259

And ambient music is defined as: “Quiet and relaxing with melodies that repeat many times.” Why ambient? A math teaching style that’s whole and all encompassing, with themes that repeat many times through the years, is most likely to be effective and successful.  The CCSS math standards are listed here in blue followed by their ambient counterparts.

Number and Operations – Fractions 4.NF
Build fractions from unit fractions by applying and extending previous understandings of operations on whole numbers.
3. Understand a fraction a/b with a> 1 as a sum of fractions 1/b.
a. Understand addition and subtraction of fractions as joining and separating parts referring to the same whole.

Simple is best.  Searching online for lesson plans that fit each standard is my first task when writing these posts.  Invariably, I am confronted with multiple convoluted, complicated examples.  This voluminous collection is the result of much hard work on the part of teachers sharing their ideas with other teachers.  My conclusion, having found similar results each time, is twofold:

1) The standards, lessons, and worksheets are overly complex: the wording is obtuse, not clearly or plainly presented, there’s a lack of cohesiveness due to both repetition and omission, and the attempts at going deeper by using reasoning and logic to explain the process or the answers conversely results in more confusion rather than a greater understanding.

2) The standards, lessons, and worksheets are overly simplified: the piecemeal nature of the standards obscures the whole or the meaning, resulting in not seeing the forest for the trees.  In actuality, simplicity becomes complexity because if care is taken to present the whole picture in a series of clear, simple steps, the naturally complex nature of math will shine through in a language and form that is both comprehensible and dynamic.

Nothing is more alienating at this age than to be forced to perceive the world (or any new concept) in pieces.  Ideally (and ironically) fractions are best taught holistically and all-at-once.  Just such an approach is used in the Math By Hand fraction block.  All 4 processes are learned at the same time, with hands-on tools and a pocket reference guide that’s there whenever it’s needed.

For example, small black beans and red kidney beans are used with a small, 6-well plastic tray to represent the numerator, denominator, and whole numbers.  A clear picture forms as the black beans are stacked in the tray, reduced where need be, or traded for the whole number kidney beans.  After working it all out with the beans, the problems are written in a workbook.  The reference guide mentioned above is called Fractions Rules and Keys and is a concise summary of the 4 processes’ rules (as referenced in #4 below). 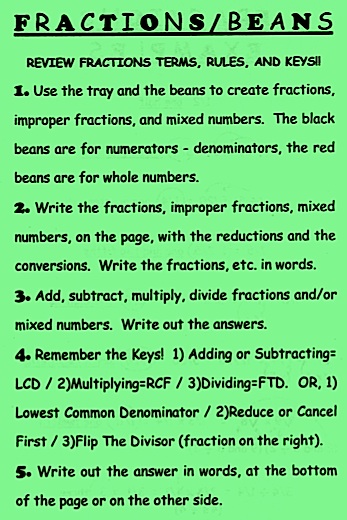