A Year in the Life: Ambient Math Wins the Race to the Top!
Day 258

And ambient music is defined as: “Quiet and relaxing with melodies that repeat many times.” Why ambient? A math teaching style that’s whole and all encompassing, with themes that repeat many times through the years, is most likely to be effective and successful.  The CCSS math standards are listed here in blue followed by their ambient counterparts.

Number and Operations – Fractions 4.NF
Extend understanding of fraction equivalence and ordering.
1. Explain why a fraction a/b is equivalent to a fraction (n x a)/(n x b) by using visual fraction models with attention to how the number and size of the parts differ even though the two fractions themselves are the same size.  Use this principle to recognize and generate equivalent fractions.

Note that fractions are first introduced in Grade 4, after an immersion in factors and factoring.  The Waldorf and Math By Hand approach is visual and hands-on, and although this standard recommends using visual fraction models, they are usually of the flat, 2-dimensional variety, either as an overhead projector slide or in a worksheet format.  And although it is helpful to have these comparative graphic images of 1/2, 2/4, 4/8, etc., it still falls short of using 3 dimensional models to convey equivalency.  Here’s an excerpt taken from the Grade 4 Math By Hand binder: introduction to fractions.

Begin teaching fractions with a simple, direct image that shows how they work, like cutting a piece of fruit into pieces. The whole becomes 2 halves, 4 quarters, or 8 eighths. Learning about factors can be a companion to teaching and learning fractions. Magic squares showed the patterns of factors in each table, as well as the relationship between them, while correlating factors with objects showed how factors fit evenly into some numbers and not others. Extend these activities to show equivalency between factors and fractions. Some aspects of the relationship between factors and fractions should be reserved until later though, specifically fractions that need to be reduced or simplified (for example, 6/12 reduces to 1/2). Later, after you’ve taught simplifying or reducing, you can show how 2/4 = 1/2, by again cutting up a piece of fruit.

If the teaching method is direct and hands-on, any concept will be much more easily grasped and understood.  As previously stated, the Common Core approach tends to be somewhat scattered and pieced together.  Better to methodically follow a logical progression step by step, with manipulatives that make sense.  A clay fraction plaque shows how fractions work in real life, using coins and circles.  “A picture is worth a thousand words” most certainly applies to this clay model! 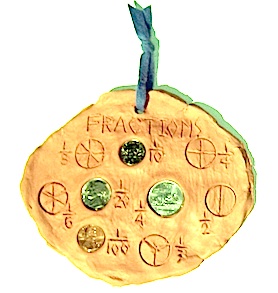 The basic nature of fractions is clearly presented here, in a format that’s creative, very satisfyingly hands-on, and stretches to encompass complexity through simplicity.  A dynamic project like this sets the tone and goes a long way toward an ultimate success and comprehension that’s built through enthusiasm and creativity.

As stated above in the Math By Hand excerpt, equivalency is best reserved until simplifying and reducing has been taught.  The next step after creating the fraction plaque is cutting construction paper squares into fraction models.  This is superior to coloring in parts of a whole on a worksheet to represent the fraction because again, it’s 3-dimensional, allowing the pieces and parts to be moved around.  This makes tactile sense and therefore is a better fit with how the fourth grader’s brain works. 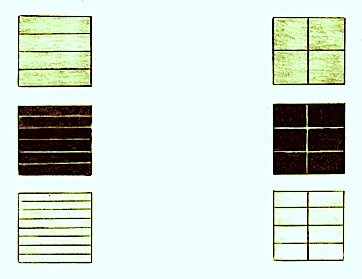 Each fraction is cut up in different versions and colors so they can be mixed and matched, therefore quite easily and clearly showing equivalency.  Over the next 11 posts, I will attempt to match the Common Core standards with the Math By Hand fraction block in a cohesive way.  Teaching in blocks is most effective for all subjects, but especially so for math.  Three weeks of daily focus promotes a deeper understanding and fosters a healthy single mindedness that contrasts with the scattered nature of present-day life.