A Year in the Life: Ambient Math Wins the Race to the Top!
Day 201

Fractions.  The word fraction is taken from the Latin frangere, meaning “to break” and since the goal of Waldorf Education is to keep the world of the child whole for as long as needed, I’ll attempt to explain why Grade 4 is the optimal time to introduce the concept of fractions.

All of the lower school grades and ages are a progression from innocence to knowing.  It’s terribly essential that this process not be rushed.  The graph of brain development pictured below indicates that sensory pathways peak early and are complete at age 7.  Language development also peaks early and is complete at age 7.  In contrast, higher cognitive function peaks later and is not complete until age 16! 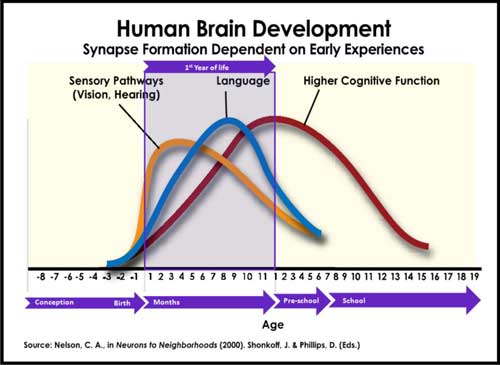 Note the slow, curving decline of higher cognitive function development.  This is a clear indicator that human child development needs to be a long, slow process.  There is a necessary letting go of innocence at each stage, and we rush it at our, our children’s, and the world-at-large’s peril.  We must be vigilant and closely observant of the readiness signs, and meet all of these severances with stories and art.

At age 7, the fairy tales with their sometimes frightening images serve as a wake-up call to the child’s awakening psyche.  At age 8, polarities become more apparent as the sometimes harsh reality of the world dawns on the child’s horizon.  Justice is not always served!  Reynard Fox and other unscrupulous, wily fables’ characters win out over the just and the innocent when they shouldn’t.  But the child finds support and sustenance in the deep goodness found in the saints’ and heroes’ tales.

At the very beginning of Grade 3, the 9 year old is evicted from the garden via the Old Testament or other Creation stories.  Again, polarities hold sway as the drama of the early human journey unfolds.  And here, sustenance is found in the comforting home arts: gardening, building, and crafting.

In Grade 4, polarities become ever stronger with the Norse Mythology stories or trickster tales from other cultures.  Here, there’s an echo of Grade 2 as the wily and unscrupulous win out over the innocent.  Loki kills Baldur after all, and the whole world is sunk into oblivion, as Fenris and Ragnarock destroy every living thing.  In handwork, the cross-stitch helps to keep the world at bay with every little “x” that’s sewn.  The child’s world widens with geography that starts at the center and radiates outward to the immediate community, though overall, the brokenness presented in story form presents a window for first introducing fractions.

As for the number line, waiting until the full picture (negative numbers, the concept of zero, and the 4 processes on the number line) can be introduced is optimal.  The 9 year old is in a fragile state as s/he crosses the Rubicon, out of childhood.  Time and measurement, long division and multiplication, and fully mastering the times tables, along with refining skills in all 4 processes, are all quite enough to take on at this time.  For all these reasons, fractions can wait!

Unfortunately, this also means that your third grader will not be standardized-test-ready.  With the firestorm surrounding the new high-stakes testing though, that may not be a bad thing.  Healthy, timely, proper development is a priority after all.  In these times, with technology hurrying them along, children can more and more seem like little adults.  But for their sake, for all of our sakes, please recognize that they are not, that they need your protection as they slowly grow to maturity.  Recognize this as a sacred trust, and abide by it.