A Year in the Life: Ambient Math Wins the Race to the Top!
Day 262

Grade 4: the year of the Trickster!  Here is a wonderful tale wherein Raven tricks Crow into giving away his entire winter’s cache of food, and of the surprising consequences that result in the raucous crow call we know so well today.  The trickster tale speaks to the fourth grader on many levels.  As s/he experiences a surge in confidence and bravado, stepping further into the world-at-large, the rambunctiousness that often accompanies this is well-met with tales of moral consequences resulting from unjustly taking power.  Or even if, as in this tale, moral consequences are not immediately apparent.

Raven used to live high up in the upper Skagit River country. He was very lazy. In the summer when the other animals were busy gathering food for winter, he would be flying from rock to stump and stump to rock making fun of them. Raven just laughed when Crow (his cousin) urged him to follow squirrel’s example – but Raven never prepared for the cold months, when the snow would drift over the ground and cover all the remaining food.  But now Raven was in trouble. Winter had come and the snows were deep. He was hungry – and Raven loved to eat. He had to find someone who would share their food with him.  Raven went to see Squirrel. He had a huge supply of pine nuts and seeds and other food hidden all over the place. Raven poked his head in squirrel’s nest in a old fir tree. Squirrel had lots to eat. Raven politely begged for some food. Squirrel scolded him – that was always Squirrel’s way – “You refused to work and save for winter – and you poked much fun at me – you deserve to starve!”  Raven went looking for Bear. But Bear was sound asleep in his cave and could not be wakened. Raven looked around for some food, but it was all in Bear’s belly – Bear had already eaten it all and was sleeping till spring.  Raven was now very hungry. He thought: “Who can give me something to eat? Everyone is either stingy like Squirrel or sleeping like Bear and Marmot, or they have gone South for winter like the snowbirds.” Then he thought of Crow – he would be easy to fool!  Raven flew to Crow’s nest. “Cousin Crow, we must talk about your coming potlatch!” Crow answered. “I have not planned a potlatch”  Raven ignored his response. “Crow, everyone is talking about your potlatch – will you sing at it?” “Sing?” Crow had not known that anybody really cared for his singing voice – though in those days, Crow’s song was much more like that of Wood Thrush than it is today.  Raven continued to talk of Crow’s potlatch. “You are very talented and possess a beautiful voice – everyone will be so disappointed if you don’t sing at your potlatch!”  “What potlatch? . . . You really like my singing?”  “We love your singing, Crow,” Raven answered. “The Winter’s cold has chilled the forest and we’re cold and hungry and singing will help us forget our cold feet and empty stomachs. Now you get started fixing the food – looks like you have plenty here – and I will go invite the guests to your potlatch. You can practice your songs as you cook!”  Crow’s hesitation now overcome, he began to prepare all the food he had collected for winter, and as he prepared it, he practiced his songs. The more he thought the feast and how everyone wanted to hear him sing, the more excited he got about it.  Meanwhile Raven was offering invitations to all the animals of the forest. (Of course Marmot and Beaver were sleeping like Bear, and Robin and Goose were gone South) To each he said the same thing: “Come to My potlatch! I have worked hard to prepare it. There will be much food at Raven’s potlatch and Crow is helping and will sing for us. There will be fern roots and wild potatoes, dried berries, fish and meat. Come to My potlatch! It will be a great occaision.” Raven did not invite Squirrel however since he had refused to share his food with Raven. But all the rest of the animals were invited to Raven’s Potlatch.  When he returned to Crow – he was busy singing and cooking. Raven told him – “Everyone is coming – be sure and fix all your food – they will be hungry after their journey. And your songs are sounding so good! Crow’s potlatch will be a great feast!”  As the guest arrived, Raven welcomed each one to his potlatch. There was deer and mountain goat and mouse, rabbit, ptarmigan and jay. The guests were seated and the food was brought out. Crow started to sit and eat – but Raven asked him for a song first. “It’s not good to sing on a full stomach, Crow”. So crow began to sing. Every time he would stop to eat – Raven would insist he sing another song. “You can’t sing with your mouth full, Crow!” Encouraged again and again by the guests – who were busy stuffing themselves with Crow’s food – Crow sang song after song after song – all day until night – and Crow’s voice became hoarser and hoarser until all he could do was “Caw – caw.”  As was the custom – the left over food was collected by the guests and taken by them for their homeward journey. Even Raven had taken his share and left as Crow was cleaning up. Crow had nothing left to eat. ” At least,” Crow thought, “I won’t go hungry – I will be invited to their feasts.” For it was the custom that having been entertained, each guest was now obliged to return the favor and invite the host for a return potlatch.  But the invitations never came. Since all the guests thought it was Raven who hosted the feast, Raven was invited to enough dinners to keep his stomach full for several winters – and he never went hungry.  But Crow, who had been fooled, had been reduced to starving, and never regained his singing voice either. He was destined to spend his winters begging in the camps of men for scraps of food. And that’s where we find him today – squabbling over scraps in grocery store parking lots – Caw! Caw! Caw!” 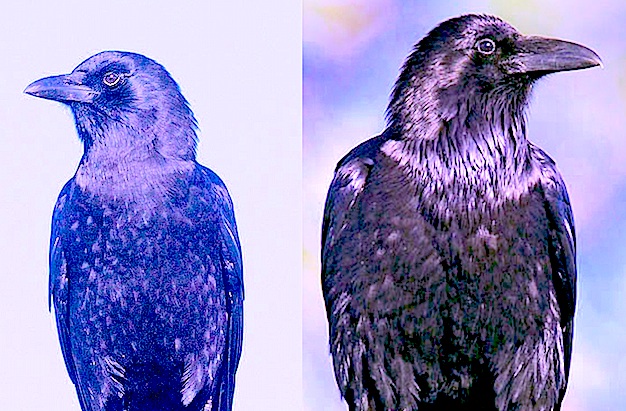