A Year in the Life: Ambient Math Wins the Race to the Top!
Day 245

Why Trickster Tales?  Here’s an excerpt from the Math By Hand Grade 4 Form Drawing/Stories Book:

Tricksters are magnetic figures who have inspired fascination in every culture, since the beginning of time. They’ve always played an important role as boundary keepers, and have also crossed or created new boundaries. The trickster’s realm is ambivalence, for s/he is at once divine and beastly, innocent and wicked, creative and destructive, fooler and fooled, giver as well as taker. S/he’s amoral, yet at the same time is the supreme prompt or source for/of morality. The trickster greatly delights in seeing that any and all rules are bent, broken, or twisted, no matter the cost, to self or others. S/he rides the edge with a ready willingness to suffer even the deepest personal humiliation as a result.

Living on the edge as an outsider, the trickster often serves as wily messenger between the human and the divine. Always on the periphery, never mainstream, the rebel is the persona most often taken up. Arbitrator or peacemaker is another one of the trickster’s guises, since s/he has the ability to simultaneously inhabit and/or penetrate complementary or opposing spheres or views. Perhaps most importantly, the trickster will carry the dark side, lightly and with much humor, for those who are unwilling or unable to carry it. Needless to say, this sort of behavior can be challenging, as well as boisterous and fractious.

Enter the fourth grader, ready to take on the world. There’s a confidence that is often over the top, in need of the sort of “comeuppances” that usually are the trickster’s stock in trade. An overly rambunctious mood, one that may be all too prevalent at this age, can be well met by these tales. Fourth graders love tricks and puzzles too, as well as secret codes and formulas. Present the mysteries and magic of math (such as magic squares and other wondrous ways that numbers can work) along with the telling of these tales. And let the trickster juggle and play!

A good story is the learning aid of choice now, because the elementary years are best approached with the arts.  Notice that the caption here has been written in cursive script (the lines to the right are indications of handwritten text).  Recent research has shown the many benefits of handwriting, as just one of many lost arts. Here’s an example of blending trickster tales with math tricks and patterns like Pascal’s Triangle, from the Math By Hand Grade 4 Binder, a math-infused illustration of the story “Nail Soup” from the Form Drawing/Stories Book. 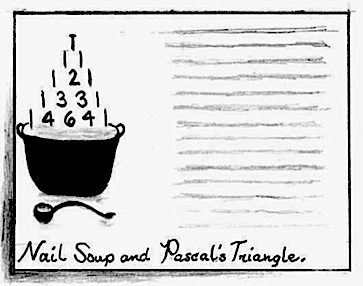 So do let your Grade 4 jester/trickster play!  Math By Hand includes juggling lessons along with instructions for making a set of juggling balls.  As always, knowledge ensues in an environment dedicated to imaginative, creative knowing, where student and teacher alike surrender to the ensuing of knowledge as a worthy goal. Tune in tomorrow, as we begin Common Core Math Standards and their ambient counterparts.