A Year in the Life: Ambient Math Wins the Race to the Top!
Day 216

Today’s post is on one aspect the 9 year old’s beginning relationship to time and how to best tune in to this developmental window.  In Grade 3, the timeless quality of younger childhood gives way to the child’s burgeoning sense of being in the world and caught up in the web of time.  Because of the fragile nature of this transition, care must be taken to approach the subject of time in a colorful, storied, and anecdotal way, that nonetheless imparts its true legacy.

One of the main features cited by the Common Core’s proponents is that it goes into great depth in both content and presentation.  The perceived problem with this so-called rigor is that it’s more often than not developmentally inappropriate, leading to frustration for both children and parents and truly unhealthy outcomes for children who are over-tested and pushed into realms and modes of thinking and learning that they are simply not ready for.

Today’s “timely” focus will be the months of the year.  The origins of their names are really quite random and surprising, as they are made up of Greek and Roman Gods and Goddesses, a Roman feast, two emperors, and numbers that do not coincide with their place in the calendar.  Here they are:

In ancient Rome, the winter months were so bleak and empty they weren’t even given a place in the calendar!  The year started when war could resume, in the month dedicated to its God Mars, March.  September, our ninth month, was then considered the seventh month, and the next three months took their cue from that.  Many wonderful stories can be woven from these bare facts, as well as rich and colorful drawings.  Here are some of the months, represented by Janus, Mars, Maia, Juno, and the numbers 7, 8, and 9. 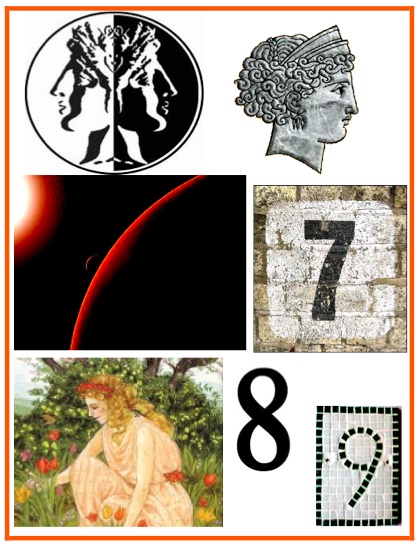 Connecting deep knowledge to the rich tapestry of history is much more effective than focusing on facts as we find them today, and drilling such dry material into children’s heads.  In contrast, knowledge ensues in an environment dedicated to imaginative, creative knowing, where student and teacher alike surrender to the ensuing of knowledge as a worthy goal. Tune in again tomorrow for more Grade 3 fun!