A Year in the Life: Ambient Math Wins the Race to the Top!
Day 196

And ambient music is defined as: “Quiet and relaxing with melodies that repeat many times. Why ambient? A math teaching style that’s whole and all encompassing, with themes that repeat many times through the years, is most likely to be effective and successful.  Today’s post features an article from a Canadian newspaper, The National Post, on the merits of slowing down and exploring the joys of tried-and-true algorithms and times tables! (Graphic by Mike Faille / NP Graphics) 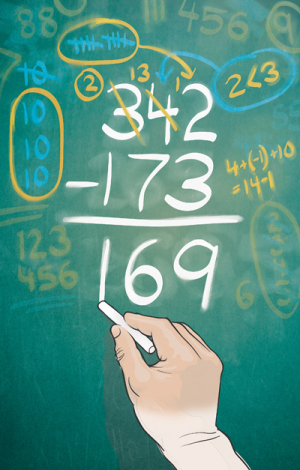 Here are a few excerpts, but do read the whole thing, it captures the crux of the Common Core dilemma:

University of Winnipeg math professor Anna Stokke and two of her colleagues knew there was “a huge problem,” when they started hearing about Manitoba grade school students not being taught how to do vertical addition, carry or borrow numbers, or knowing their times tables.

Then, two years ago, she and Robert Craigen, a fellow U of W professor, and Fernando Szechtman a math professor at the University of Regina, formed WISE Math — the Western Initiative for Strengthening Math Education. They set up a website with a blog, gave lots of media interviews and started meeting with government officials to push for changes in the way math was being taught.

“Then we started hearing from a lot of parents, from all across Canada,” said Ms. Stokke, whose group has collected nearly 1,000 signatures supporting its calls for reform. “It’s a lot of work and it’s a lot of trouble to advocate for things like this … but our kids are worth it, because in the end we really need our kids to learn math.”

The group is now seeing the fruit of its efforts this fall, as Manitoba rolls out a “back to basics,” revised curriculum for kindergarten to Grade 8, one explicitly requiring students to learn times tables; have automatic recall of answers to basic problems such as 30 – 5 = 25, known as math “facts”; and standard algorithms for key math operations — and perform them without using a calculator.

It marks a step back from “new math” and “inquiry-based” teaching approaches that emphasize such things as estimating and multiple “strategies” in basic calculations — complicated methods of solving math problems in a bid to develop students’ deeper understanding of how those calculations work. Such approaches are common across Canada and are part of the Western and Northern Canadian Protocol (WNCP), a common framework, initiated in 1995 and revised in 2006, used to develop curriculum in all western provinces, Canada’s three territories, as well as in Atlantic provinces including Newfoundland, Nova Scotia and Prince Edward Island.

“We were hearing concerns from parents and we were hearing concerns from some math professionals,” said Ms. Allan, who called her province “a leader” in math reform. Besides worrying about students not learning basic math skills, parents trying to pitch in with their children’s homework, “were having difficulty helping their young people because they weren’t able to understand it either.”

Sound familiar?  It seems Canada has been dealing with a scenario very much like the Common Core for a while now.  Note that both Math By Hand and Waldorf Education feature a lively, effective blend of the “basics” with the “deep understanding” that the new math standards are going for.  But the crucial difference is that both approaches are so holistic and child-centered that there’s never the danger of age-inappropriateness, over-abstraction, or alienating disconnection.