A Year in the Life: Ambient Math Wins the Race to the Top!
Day 71

It seems I’ve been sidetracked.  Just wanted to insert a post or two re the number stories and the other language-rich aspects of an integrated math curriculum and how it all relates to the Common Core Language Arts Standards.  After reviewing said standards, I felt compelled to explore how the Waldorf method does so much more than the Common Core requires.  The 90-some Grade 1 CCSS Language Arts Standards will be reviewed and juxtaposed alongside their ambient counterparts, over the next eight or so blog posts.

Meanwhile, please consider the intricate complexity of yesterday’s story, “The Prince in the Black Scarf.”  This is the level of literature that permeates the Grade 1 curriculum, forming the backbone and scaffolding of a well-rounded, complete year of learning.  I hope to rise to the challenge of favorably comparing the subtleties of the Waldorf approach to the direct, abstractly analytical Common Core.  Yesterday’s fairy tale will carry the impetus for this comparison.  Wish me luck!

I once attended a teacher’s in-service for promoting literacy and literature appreciation where a speaker extolled the books of William Steig, a famous cartoonist who began writing children’s books at 61.  The speaker focused on the complexity of Steig’s writing, how it stretched the literary capacity of the children who read it (or had it read to them).  His books were mine and my daughter’s favorites.  We read them all!  As previously mentioned, she did not learn to read independently until the beginning of Grade 4, and is now a brilliant PhD candidate at Cal Berkeley.  So please take heed: slow learning really is best.

Here is an excerpt from Steig’s “Sylvester and the Magic Pebble.”  Note the complexity of the language and structure, and look down below for some lovely images of Sylvester and his family.  Remember that knowledge ensues in an environment dedicated to imaginative, creative knowing, where student and teacher alike surrender to the ensuing of that knowledge as a worthy goal.

Sylvester Duncan lived with his mother and father at Acorn Road in Oatsdale.  One of his hobbies was collecting pebbles of unusual shape and color.  On a rainy Saturday during vacation he found a quite extraordinary one.  It was flaming red, shiny, and perfectly round, like a marble.  As he was studying this remarkable pebble, he began to shiver, probably from excitement, and the rain felt cold on his back.  “I wish it would stop raining,” he said.  To his great surprise the rain stopped.  It didn’t stop gradually as rains usually do.  It CEASED.  The drops vanished on the way down, the clouds disappeared, everything was dry, and the sun was shining as if rain had never existed. 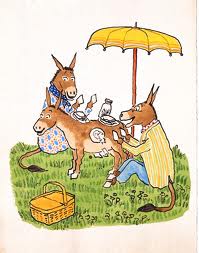 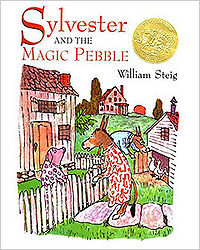 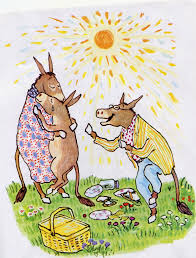