A Year in the Life: Ambient Math Wins the Race to the Top!
Day 67

As promised yesterday, here is the child-sized story of zero.  Of course, following the spiral method, the true story will emerge later on, but at age 6 or 7 this legendary version will pave the way for the factual account.  And in the meantime, a heart space will be created for the concept.  It is essential, as with all knowledge passed along to our children, that we transform the factual into true wisdom through the graceful medium of story and pictures.

This story is presented, along with three other stories (Roman Numerals, Arabic Numerals 1-5, and Arabic Numerals 6-10), at the very end of the first math block.  Following the Waldorf method, the story is told after the previous main lesson and retold by the child(ren) the next day, as an introduction to doing the captioned drawing. See below for the suggested drawings (these drawings would actually be done in color).

Knowledge ensues in an environment dedicated to imaginative, creative knowing, where student and teacher alike surrender to the ensuing of that knowledge as a worthy goal.  Tune in for more Grade 1 numbers tomorrow!

The Story of Zero

Once there was a lovely land where the scent of flowers and spice filled the air, and where many different creatures lived happily together.  The sun shone golden bright there as it does everywhere, but some families had very little else besides the sun’s golden riches.

Suraj, a boy whose family was very poor, had a wonderfully cheerful monkey friend named Sunya (which means empty).  Suraj chose that name because empty was how he felt a lot of the time.  And when he was feeling especially sad and bereft, Suraj would find solace in his friend as he softly called his name again and again, “Sunya, Sunya, Sunya . . .”

When Suraj grew up, he discovered something that would be most important to everyone, everywhere.  The gift was called sunya, which as we know means empty.  Suraj, thinking about how kind the sun is to everyone, giving its riches so freely, imagined the shape for sunya should be like the sun.  Suraj’s gift was given many names as it traveled, one was zifr (nothing) and another was zephyrus (west wind).  Now it’s called by a name we know: zero. 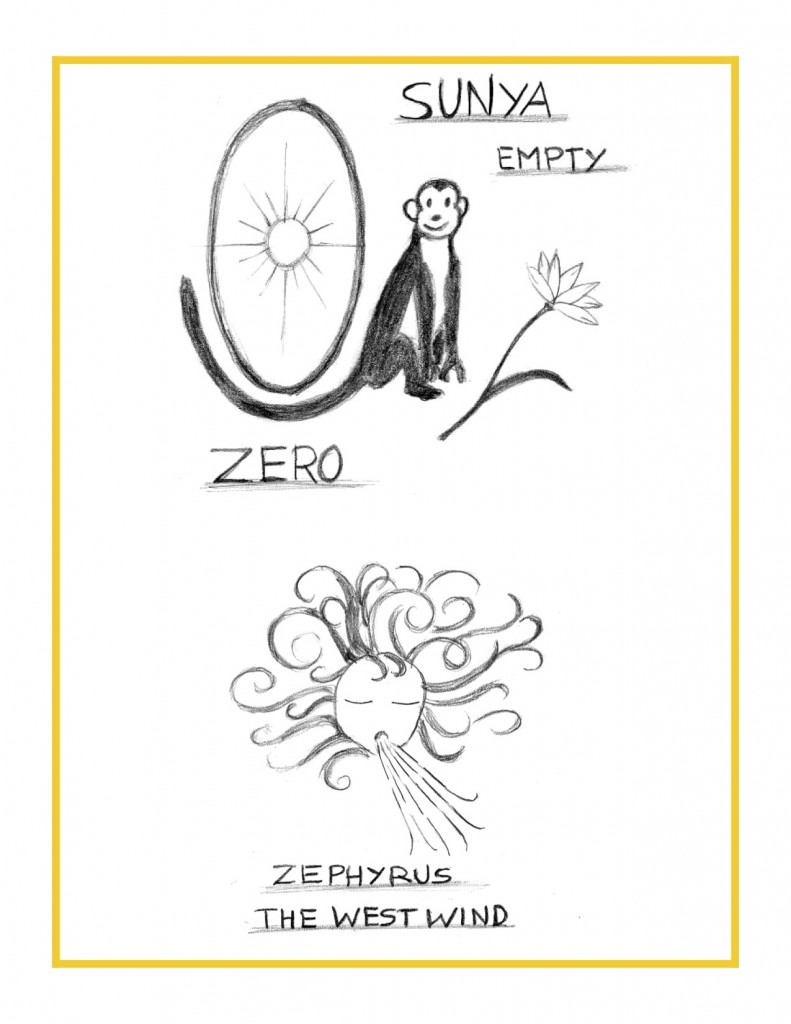