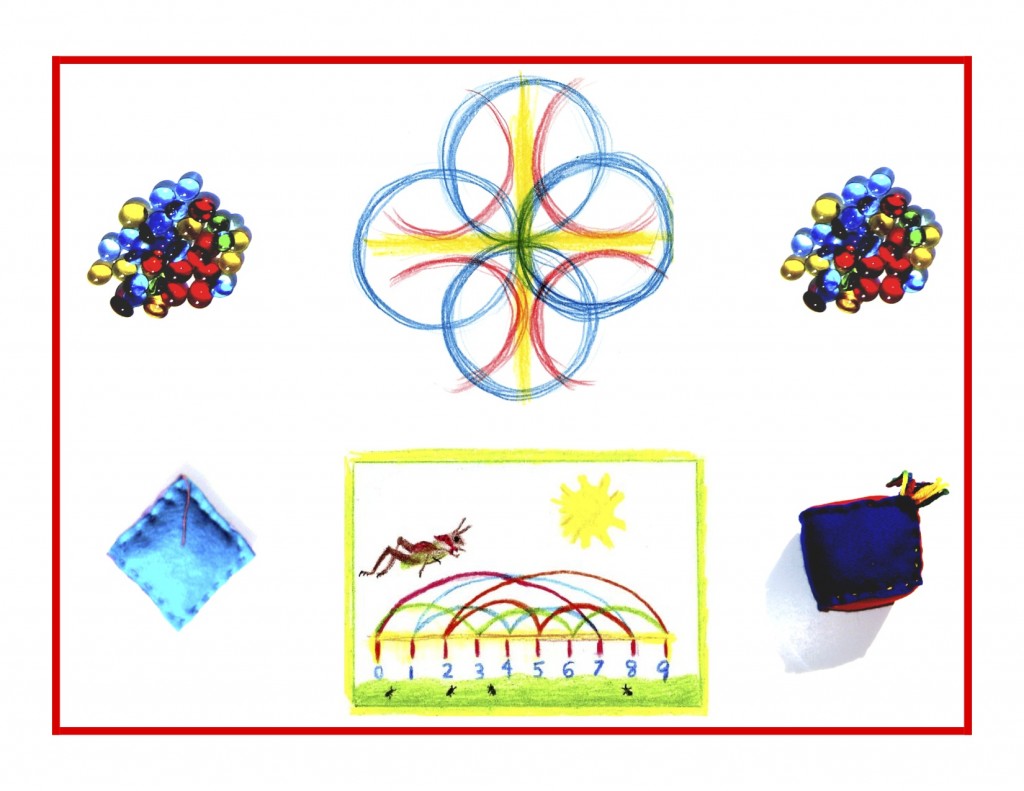 A Year in the Life: Ambient Math Wins the Race to the Top!
Day 30

Why ambient?  A math teaching style that’s whole and all encompassing, with themes that repeat many times through the years, is most likely to be effective and successful. Today’s blog will focus on the Circle Time segment of the Kindergarten day, with suggestions for integrating the Common Core Standards and the ambient math counterparts that appeared in this blog on Days 3, 5, 7, and 13.  The standards may be paraphrased and will appear in blue.

A bit off-topic, but as I sit here about to write Day 30’s post my husband is watching Shark Tank, the high-stakes TV show that pairs entrepreneurs with potential investors.  The current hopeful has invented yet another app for the mobile phone, and the sharks are crazily bidding up against each other.  So here I sit with a patently low-tech math product that’s low-tech for very good reasons.  One of which is that the nature of teaching and learning must be personal: a human, student-mentor connection is an essential element.  We seem to be so sold on the new that the tried and true basics are falling by the wayside.  Many computer math apps promise fun and instant success, however do note that a trend toward “slow” is gaining in popularity.  Slow food, slow parenting, and slow math, because anything worthwhile is worth waiting for.  Do wait with/for your child(ren) through a healthily slow learning pace.  And I need to wait for Math By Hand to win the slow race to the top amongst all those colorful, fun apps!

Day 3
Counting and Cardinality   K.CC
Know number names and the count sequence.
1. Count to 100 by ones and tens.  2. Count forward from any number, rather than having to begin at one.
Math is integrated into the Morning Circle from Grade 1 on, but typically not included in the Kindergarten Circle.  There are so many fun number songs though, including “Over In the Meadow” and “Bottles On the Wall” as suggested here.  The Circle is a lively mix of recitation, singing, play-acting, and movement, and teaching songs or verses with movement provides all of the above.  Number names and the count sequence are learned with both songs.  Counting to 100 forward, backwards, by 10’s and 20’s, and random sequence are all covered with the “Bottles On the Wall” song.

Day 5
Counting and Cardinality   K.CC
5. Arrange as many as 20 objects in a line, rectangular array, or circle, or as many as 10 in a scattered configuration.  Give a number from 1-20 and count out that many objects.
Jumping the circles on the floor from 1-10 or 1-20 brings the counting together with large movement, thus enhancing retention and promoting a lively eagerness to participate.  Singing or reciting “One, Two, Buckle My Shoe” is a big help because the numbers are in context, and the rhyming and singing are excellent memorization tools.  The construction paper circles could be no bigger than a foot in diameter.  You may want to have dots (like the counting stones) on one side for number recognition, and the other side blank for use with the arrays.  Say, “five” while pointing to the 5 counting stone, have the child(ren) place that many circles on the floor, then jump and count them.

Day 13
Measurement and Data   K.MD
Describe and compare measurable attributes.
1. Describe several measurable attributes of a single object.
Take the variety of small objects gathered from around the house into the circle.  Pass them around one at a time, pairing one descriptive word with each object and having each child repeat the word as s/he receives the object.  After the passing game has been played for a while, each child could come up with a different descriptive word as s/he receives the object.

Knowledge ensues in an environment dedicated to imaginative, creative knowing, where student and teacher alike surrender to the ensuing of that knowledge as a worthy goal.  So, on to Kindergarten tomorrow!

Categories: Common Core, KindyFebruary 1, 2014
Share with PinterestShare with FacebookShare with TwitterShare with Google+